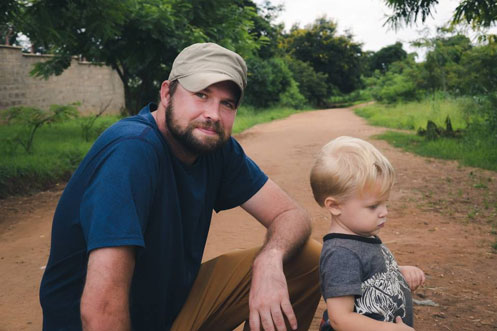 Jordan Maiden has volunteered with WaterStep for over five years. We love Jordan!

He is a smart, enthusiastic, level headed, hard-working, passionate, multi-talented man. Whew, and that’s not even half of his talents!  Jordan’s wife, Emily received a Fulbright scholarship to conduct research in Malawi. When he told us their little family which included their one year old son, would be moving there for at least a year, we knew Jordan would be bringing WaterStep to Malawi.

Jordan’s efforts have paid off. He has seen first-hand the effects of drinking bad water. He has seen the traditional ways of collecting water. He has seen chiefs, villagers and politicians embrace the idea of safe water and he has trained everyone who will listen. Jordan is a true advocate of health education, hand-washing in particular, and he has taught countless people of its importance.

Recently, Jordan and his family traveled to Mchinji, Malawi with a friend on the campaign trail. Water became the topic and Jordan contacted WaterStep for additional equipment. Safe water, Health Education and bleach disinfectant are now available to this remote village. Making a difference in people’s lives, but most importantly the children of this community know that there is hope for healthy future. This friend, Aaron is running for parliament. He has a good chance of winning. Just imagine the change he could bring by implementing a WASH (water and sanitation and health) program to Malawi. It’s huge!

Jordan sees the potential, he’s living amongst the needs. He is busy making connections with other NGO’s in the area, encouraging them to add water and disinfectant to their work. He’s stressing the importance of health education and sanitation. As much as I’d like him to come home and hang with us in our offices again, he is too important in the field. He’s really not a volunteer any more, he is a WaterStep Ambassador!