WaterStep Disaster responded to a hurricane in 2017

Since significant portions of Puerto Rico’s electrical grid remain offline, affected pumps and filtration systems can’t sanitize and deliver water. Even when people do have access to a water source, they often can’t get disinfectant like bleach or chlorine to treat water and clean the receptacles they’re using to collect it.

The crisis shows no signs of easing, either. Estimates indicate it’ll be six to eight months before power is fully restored on the island. And while the federal government continues to deliver bottled and desalinized water to the U.S. territory, it hasn’t yet met Puerto Ricans’ everyday need for a large water supply necessary to bathe, clean, and cook.

WaterStep’s International Field Consultants and Ambassadors go to great lengths to help neighboring communities care for their own water supply. They teach community leaders the process of chlorination, using WaterStep’s m-100 ChlorineGenerator that will provide up to 10,000 gallons of water each day. They also share the technique of making bleach to be used as a disinfectant along with teaching health education and best hygiene practices.

In 2018. WaterStep created a business development kit to provide international entrepreneurs a means to monetize WaterStep’s BleachMaker. The BleachMaker is a portable and cost-effective device that produces lifesaving disinfectant using only salt, water, and a power source. The Business Development kit contains everything someone needs to start a business using the BleachMaker. Each kit includes a BleachMaker, business plan template, labels, and marketing materials. 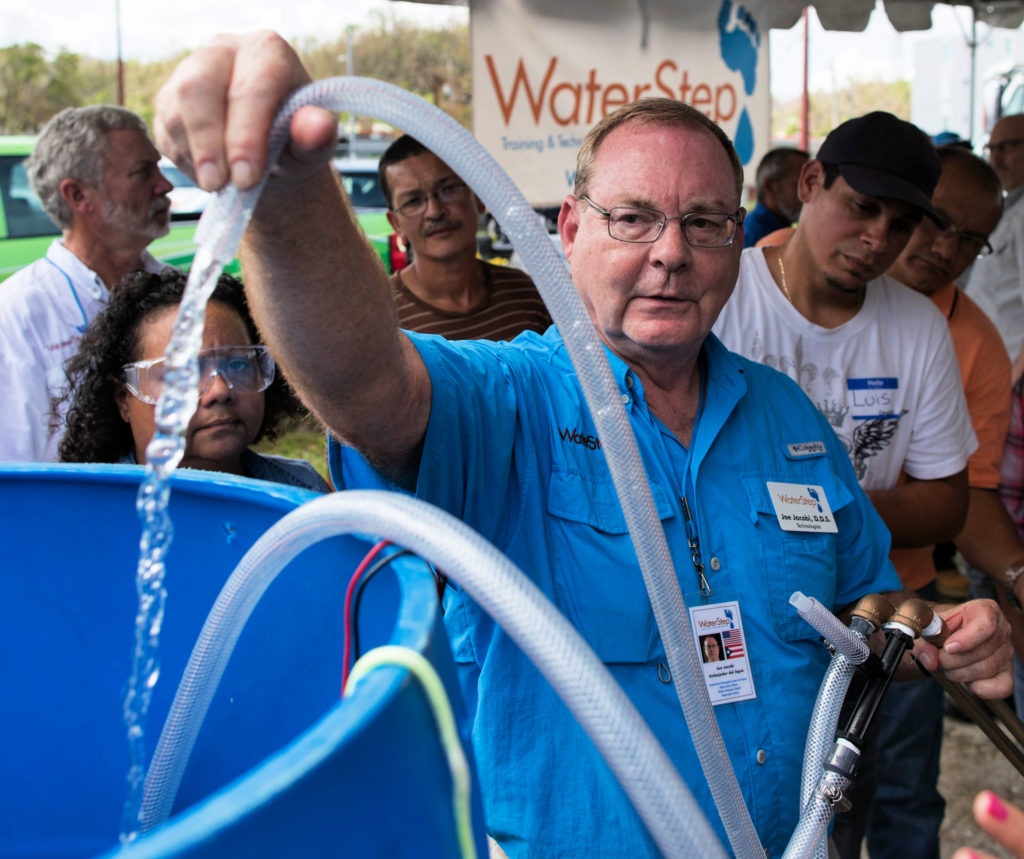 %
of Kenyans rely on unimproved water sources, such as ponds, shallow wells and rivers.

In early October, WaterStep, with support by General Electric and donors, flew volunteers and 22 of their water purification systems and 7,000 meals to the island. Teaming up with Puerto Rican community organizer Alexandra Lugaro, emergency workers and community leaders from 22 Puerto Rican municipalities were trained on how to use the equipment, capable of producing 10,000 to 30,000 gallons of water per day.4

Hurricane Maria hit Puetro Rico in late September 2017 . At that time CNN reported that 76 cases of leptospirosis, bacteria found in rodent and animal urine, have been reported and confirmed around the island, as residents rely on surface run-off water sources for their bathing and drinking water.

“I’ve been coming here to the roadside to get water since a couple days after Maria,” said Avellyn Schelmetty, who lives in the mountainous Utuado municipality.  “My daughter got sick and became dizzy. She was sweating with stomach aches and couldn’t stand up on her own.”

Schelmetty, with her entire family sleeping in the one livable room left of their home,  stopped giving her family that water to drink. “It’s just hard to find water right now,” she said.

WaterStep partnered with the Puerto Rican Leadership Council to supply 56 more of their disaster kits to the island.

“We are stepping up our game and we’re expanding our manufacturing capability to meet this need,” Hogg said. “Our goal is to see our water disaster kit in all 78 of the municipalities on the island. After taking 22 in our initial training response in October, we plan to ship 20 more by next week and another 36 before Thanksgiving.”